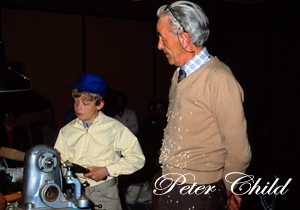 In the early 70’s an Englishman, Peter Child wrote a book, The Craftsman Wood Turner. The major premise of this book was that bowl gouges could and should be used for turning bowls. He had developed the “Long and Strong Bowl Gouge” and Robert Sorby in England manufactured it. It was an unheard concept: “Turning a bowl with a gouge”.

The result: What took hours of scraping was reduced to minutes by using the gouge. 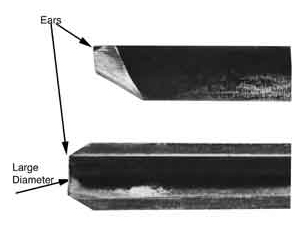 Although revolutionary this gouge of his had one really severe drawback. It was square faced with ears or corner points that tended to catch the wood, especially near the edge of a bowl nearing completion. Another problem was the tool’s large arc ie the bottom of the “U” which, if not held very firmly, tended to skate across the bowl blank’s surface. A third problem was that the handle was too short, even though it was longer than conventional tools. Additionally, the tool’s steel was high carbon, which obtained a sharp edge but could not hold it for long. In spite of these problems, it was the best tool available at the time and it made bowl turning easier and faster. 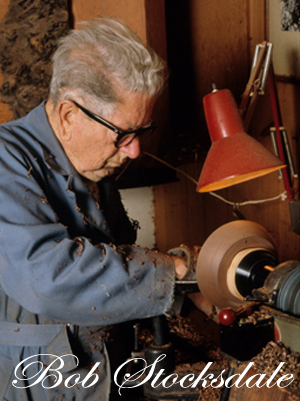 Meanwhile in the United States, Bob Stocksdale had modified a Marples bowl gouge that he had used exclusively since he began turning in the early 40’s. His use of the gouge predates, to the best of our knowledge, any other turner. Bob Stocksdale grew up on a farm in Huntington, Indiana. His family had no electricity and Stocksdale used a lathe powered by an old washing machine engine to make simple baseball bats, table legs, and croquet sets. He moved to Berkeley in 1946 and produced more than two hundred turned bowls every year from his basement studio. Stocksdale was known for the variety and rarity of materials in his work. He enjoyed hunting for unusual types of wood at auctions and ship-repair yards, and often received unique samples from collectors of rare wood around the world. 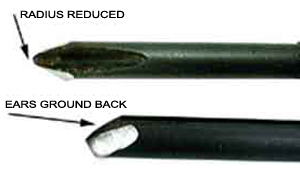 When Bob met Jerry Glaser in the early 60’s they set out to improve that gouge. The first tools Jerry made for Bob Stocksdale were formed from square material that was milled to approximate the look of the hot forged tools Bob was using. They looked a lot like the British long and strong spindle gouges. It wasn’t long until Jerry realized there was a lot of wasted effort to only achieve a “look.” After those initial tools, Jerry switched to milling the tools from round bar stock.

There was an event from this period that is worth noting. Jerry was a full-time engineer and a serious woodturner. Thinking that toolmaking was a direction that others should pursue, in 1966 Jerry sent a sample of the M2 high-speed steel to a leading British toolmaker. The suggestion was made that they should develop woodturning tools from such steel. The outcome: Jerry never received a reply, and British tools were not made at this early date in high-speed steel. The more significant outcome was that Jerry decided to develop a full line of high-speed steel (HSS) tools independent of other makers and thus a legacy was born. 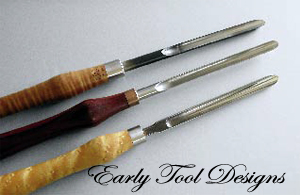 The evolution of the Stocksdale  Gouge, led to a whole family of both spindle and bowl turning gouges, articulated boring bars, screw chucks and sharpening devices. These innovations were developed to fulfill the requirements of a new generation of woodturners (read the timeline section).

The deeper fluted gouges of Jerry’s design and their longer handles made bowl turning easier, faster and safer. In the mid-eighties, with some misgivings, Jerry changed his handles to aluminum. These hex shaped handles withstood the shock of turning, practically eliminating the possibility of breaking but more importantly, they did not tend to roll off of a workbench. The most innovative aspect of the aluminum handles was that they could be filled with lead shot. This concept made the tool practically vibration free, and the added mass gave it much more stability. Jerry also changed the tool steel. He had been experimenting with M2, M4, and settled on a steel that he called A11 (CPM10V). It maintained its edge 5 times longer than any steel. This too also gave birth to the usage of CPM15V. The evolution of these tools have now placed them as the choice for most professional and amateur turners around the world.

Engineered by a Visionary Ahead of his Time!

Many contemporary tool makers claim today to have developed new tool designs by placing more mass under the flute, the use of cryogenics and even lead shot in handles. 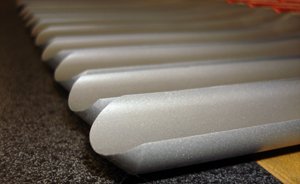 The reality is that woodturner innovator and toolmaker, Jerry Glaser was the predecessor to all of these breakthrough procedures that are still being used today. Jerry’s tools are a complete departure from traditional woodturning tools. They don’t just look different. They ARE different. Jerry’s engineering background,  provided a solid foundation in understanding metals and woodturning. With a career span of over 70 years, Jerry Glaser is a symbol of innovation and unprecedented achievements in tool design. 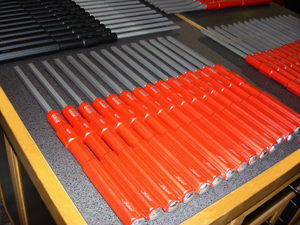 The superiority of Glaser Tools is constantly being imitated. The combination of high-vanadium steel with vibration absorbing shot-filled powder coated aluminum handles produces a tool with superior edge-holding capacity that is less fatiguing to use.

The durability of their cutting edges, the indestructible handles and other special features, make them the best woodturning tool available today.